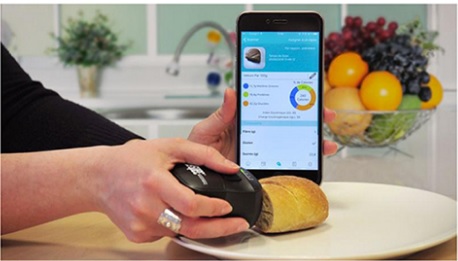 * This post is inspired from an original article in Danish by Liv Bjerg Lillevang, published on Ingeniøren.dk, 2 January 2017. The English adaptation has the author’s permission for posting * Consumers are becoming choosier about what they put in their mouths. For some it is a lifestyle choice. For others it is a question of health. And for a few it’s a matter of life or death.

Now Canada’s Tellspec puts them in control. Tellspec’s handheld scanner analyzes food and in a few seconds downloads a detailed analysis directly to your smartphone. You can see right away if your bread contains gluten, or how much fat is really in that “healthy” salad. Tellspec is one of the three 2016 winners of the Danish-based Water Air Food Awards (WAFA), based on an expert selection committee’s recommendations and  crowd voting on the WAFA website. The Expert Selection Committee emphasizes the technology’s potential: “With food shortages looming, the scanner’s ability to assess quality can reduce waste regardless of ‘best before’ dates. It can also put pressure on the food industry to guarantee their products.” WAFA President Tina Lindgreen comments: “Tellspec has great potential. The technology is scalable, so that ordinary people can afford to use it, and thereby have an impact on food safety.” And thousands of voters worldwide agree! Food in the Cloud On her visit to Aarhus, where Tellspec is opening its European office, CEO Isabell Hoffmann explains how the three-part technology works: “First is the scanner. It is a spectrometer that measures in the near infrared spectrum between 900 and 1,700 nanometers. Next is the cloud, where our servers run 242 parallel algorithms to compare the food content with known data. (The data is constantly upgraded.) Finally, a smartphone downloads the results within seconds.” A Multipurpose Tool While the technology benefits everyone, it can be vital to people suffering from food allergies and diabetes. It can uncover traces of nuts, eggs and milk in ready-made foods, as well as chemical residues in fruit and vegetables. It can even tell  how old meat is. “With the technology we have given consumers a chance to make the right choice when choosing foods,” Hoffmann explains that Tellspec app serves everyone who has an interest in food quality, whether consumers, producers, retailers, or even researchers. “Our third app caters to researchers and universities. Scientists can use the scanner to collect spectra in a reliable format after the researchers’ own calibrations.”. Already universities are using the scanner for various purposes, like determining plants’ fluid balance to pick the right time for harvest. Fighting Food Fraud Tellspec data also enables scientists to study possible correlations between cancer and the food consumption patterns in specific areas. With the upcoming Danish launch, Denmark in particular stands to benefit! “We are going to have much greater impact on food producers’ understanding of health, not only from governments but also from consumers. For despite the World Health Organization’s  recommendations for sugar and fat content in finished products, it is difficult to know if the manufacturers effectively comply with the recommendations, “says Hoffman. With Tellspec, for example, consumers can detect when corn syrup is substituted for sugar and put pressure on manufacturers to use healthy ingredients. Learn more about Tellspec here!